Etusivu Etusivu
R
Käyttäjätaso 1
Today I picked up a 1800mhz signal from a new Cell (ID 733700) where I live in Masku which is close to Lemu. While trying to adjust my antenna to it I notice this signal is not coming from the tower in Lemu (all those are still 800Mhz). From what I can tell the tower is located slightly south of Askianen (looking at cellmapper). This tower is some 9.1km from me but due to my antenna and mostly uninstructed line of sight I can still get a quite good connection to it.

I ask because I get over 10x the bandwidth at 1800mhz and its not just because of the frequency, its because the lemu station is always conjested from 3pm to around midnight. Updating that Lemu antenna from 800mhz to either 1800mhz or 2100mhz would make many people happy, espicially given a competitor has a cell at a better than 800mhz frequency over this area also.
R
Käyttäjätaso 6

+3
Lemu will be getting LTE-improvements and they're scheduled to be ready during July. Unfortunately I don't have the information whether the upgrades will be 1800Mhz or 800Mhz. These improvements should however help with the capacity issues.

There is a 1800Mhz tower closer to you other than the one near Askiainen. This one is in Masku, a little over 5km away from you in northeast.

So walk tall, or baby don't walk at all. - Bruce Springsteen (New York City Serenade)
R
Käyttäjätaso 1
Unfortunately the tower 5km away you mention I cannot reach due to the geography (I'm behind a hill). Can you give more info or find out on the kind of upgrade planned for lemu? Is that a new tower or more cells on the present tower (I think there are three on there) for example?

+3
There will be more cells in the existing Lemu tower, not a new tower. I just checked with the network management and the new cells will be 1800Mhz frequency.

The estimated time of commisioning is in July.
So walk tall, or baby don't walk at all. - Bruce Springsteen (New York City Serenade)
R
Käyttäjätaso 1
Ohh wow, this is great news given I have clear line of site to that tower in Lemu, thanks Red and olkitu, I look forward to the change. I'll report here once its up so I can give a customer standpoint of how it will improove the service in this area. I'm expecting a very good improovement :)

Once the LEMU tower is up I'll drive around the area (and Askinen) to register them all on cellmapper. I guess if you look at the cellmapper MAP you can have a good guess where I am located on the Kustavintie road even without looking my customer information.
R
Käyttäjätaso 1
Hi there, a 1800mhz cell came online today in Lemu, the ID is 631557. The SINR quality however coming from it is very poor and all over the place. I was getting a SINR of 12 minimum from cell 733700 which is over 9km away and it was quite stable even though there were forests between us.

631557 on the other hand is only 3.5 km away and I have line of site to it. The SINR is moving from 7 to 14 eractally and sometimes jumping up to over 20. Is work still ongoing on this cell? Also, in what direction from the tower is cell 631557 pointing?

+3
The work in Lemu area has been done yesterday, so no more work is being under way. The bouncing of the signal might be due to the cell breathing as the new frequency is 1800MHz in the area. 3,5km is somewhat long distance if there's many users in the same aarea. Has the connection been what kind in general after yesterday? Are you getting better speeds than before and/or is the connection more stable?
R
Käyttäjätaso 1
Before yesturday I was connecting at 1800mhz to a cell 9.5km away. The signal noice was better for me on that cell (733700), it was no lower than 12. Ping test results from that cell were 15ms average.

The new cell is 3.5km away and the tower is in line of sight (I can see it), my antenna are pointing right at it. SINR level around 7 but drops to 5 and sometimes flucuates between 5 and 28 (this is a massive modulation), espicially given the cell 9.5km away was normally very stable at around 12.

If I conect to sell 631554 (800mhz) which is on the same tower as 631557, SINR is much more stable. On the test I just did bandwidth is more on this cell than the 1800 on the same tower. Can you tell me what direction cell 631557 is pointing from the tower as Im wondering if the problem is the cell is not pointing in my general direction?

+3
That cell (631557) is pointing south-east.
JÄHÄ
R
Käyttäjätaso 1
That means the cell is pointing directly at out home almost. Have a look at this LTEwatch picture. You can see the SINR going crazy from 20 to 6. It is not normal, as I mentioned, when I connected to the tower 9.5km away before (ID 733700) SINR never goes lower than 12.

The 800MHz frequency from lemu (631554) which is the same tower has also started going crazy I noticed today. Where It used to be stable and never lower than 12, I can only get a SINR of 4 to 6 now. How can the service signal degrade so much in 2 days? Have thay also altered the 800Mhz tower in Lemu? 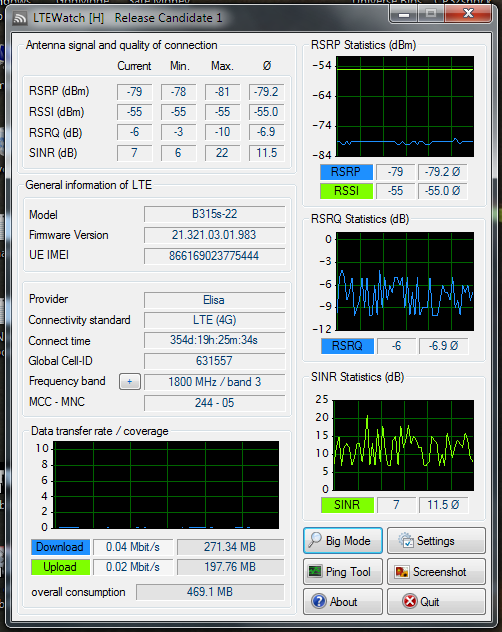 +1
I quess the old 1800MHz BTS causes poor SINR/RSRQ values because they are working on the same frequency. Also all neighbouring cells at the same band and traffic on them are causing problems in signal quality, which is the key to a fast connection.

Try to log those values on the night / early morning? Are those more stable? If you experience poor SINR/RSRQ on the evenings (prime time), it's most propably caused by traffic in the cell you are connected to or the neighbouring cells.

Which is your phone's model? Maybe you could check if there's any neighbouring 1800MHz cells with it. Cellmapper (4.2 API) should list all the cells in the same frequency and with PCI value you may check which is which on the map.
R
Käyttäjätaso 1
Its defo not traffic, its 1AM and the problem is the same. I have also just taken the simm from my router and placed in my mobile phone to rule out the antennas on the roof. Something has gone ohh so very wrong in this Lemu update. The 1800MHz tower is still all over the place.

On top of this the 800Mhz cell (631554) which we have been using for the last 2 years is totally degraded. It is not even detected any longer using cell mapper from my mobile phone. Its almost as if its power has been turned right down or something. Its strange because it was fine yesturday and it was mentioned the work had finished.

What have they done to the 800Mhz cell on top of everything else? Has it been re positioned?